The History of the Talbot County – Maryland House and Garden Pilgrimage

The Maryland House and Garden Pilgrimage is a beloved springtime tradition for thousands of “pilgrims.” From the beginning, the Talbot County Tour has been the most prestigious and sought after tour for several reasons: our creeks and rivers of unparalleled beauty; the magnificent colonial era properties along those waterways; the many points of historical interest; and, the outstanding gardens, many of which were planned by the best professional garden designers of their day. 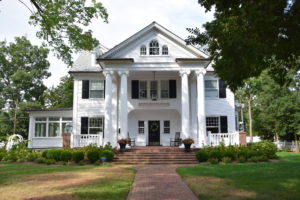 The Maryland House and Garden Pilgrimage Committee was formed in 1930 by the Federated Garden Clubs of Maryland and incorporated as a separate non-profit entity in 1953. Its philanthropic mission to support preservation and restoration of architecturally significant properties has remained constant with County tour sponsors directing their proceeds to benefit special projects in their counties.

After the earliest years when the event was more of an informal visit of garden club ladies from Annapolis, the Pilgrimage counts 1937 as the first tour with seven counties and 37 properties – including Talbot County – and has continued every year since, with few exceptions. In Talbot County Garden Club’s 100th year, the Pilgrimage is hosting its 80th tour.

The 1937 tour cost only $.50 per house and the guidebook, which included Chesapeake Bay ferry schedules, cost $1.00. It’s hard to imagine the time and effort visitors took to get here before the Bay Bridge was built, and even then it was a long trip on rural roads. From 1963 – 1973, MHGP hosted sold-out cruises from Baltimore aboard the 400-passenger M.V. Port Welcome that alternated dockings between Chestertown, St. Michaels and Oxford.

In our Club history, it’s interesting to note only three houses were open for the 1940 tour, and in 1947, seventeen houses were open – from the northern end to the southern end of the County! Currently, a tour focuses on one area of the County and features a manageable number of houses so that pilgrims might have the best possible experience. After the 50th Anniversary Tour in 1987, which featured a number of houses from the 1937 Talbot Tour, the TCGC board of directors voted to host the Pilgrimage only in alternate years. Now occurring in even numbered years, the Tour is TCGC’s most successful fundraiser. 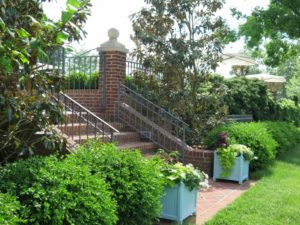 Pilgrims clamor for glimpses of such fine houses and gardens as the grand Palladian style Wye House, owned by generations of the Lloyd family, prominent in Talbot County since the 17th Century, and the spectacular 19th Century Georgian Revival style Harleigh Farm, opened for the first tour by TCGC’s first president, Mrs. Preston B. Spring, and many times since by the current owners. Early tours showcased the great mansions time after time, and later tours recognized the popularity of also including smaller, attainable charmers around the County. And, always, the beautiful gardens, old and new, large and small, have been a huge draw. 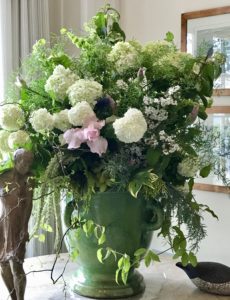 members paired with the unending generosity and hospitality of so many homeowners. Putting on a premiere tour requires a year of careful organization of myriad details tour after tour. With the willing, enthusiastic, and dedicated participation of 100% of the Club’s membership, every duty is attended to — from providing hostesses to road marking. It’s the work of the flower committee, led by the Club’s prizewinning, talented arrangers, that creates the crème de la crème of the Talbot Tour – the sparkling, eye-catching flower arrangements, which fill each home, interpreting the surroundings and enhancing the beauty of each place.

The Talbot Tour epitomizes what the County is so famous for – elegant, waterfront living. A pilgrim in 1987 was heard to remark, “It is not necessary to go to England to see the most beautiful gardens,” and we can enthusiastically add, “and houses and floral arrangements!”