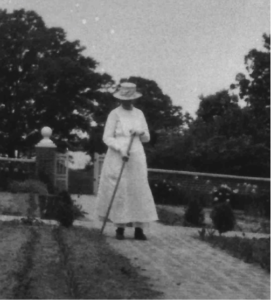 In 1917, 10 men and women in Talbot County decided it was time to establish a garden club. They were a determined group whose initial focus was on developing new gardens, as well as restoring old ones, and protecting the beauty of the Eastern Shore. Mrs. Bessie Spring was the Club’s first president.

One of their first projects was the elimination of billboards along Route 50, a cause that spanned some 14 years and resulted in the elimination of approximately 21,000 signs. It was a stunning victory for the group, and continues to contribute to the unobstructed views visitors enjoy when driving through Talbot County.

With the advent of WWI, many of the male members went off to war and the women became engulfed in work supporting the war effort, so the club disbanded until 1924. When the Club resumed, the decision was made to limit membership to 50 active members, true dirt gardeners.  That decision that still stands today. Later, an associate category of membership was added for those wishing to reduce the number of hours spent on Club work.

Another early project of the Club that lasted decades was landscaping the Talbot County Courthouse. In 1926, 1,120 boxwoods, propagated by member Ernest Hemming from cuttings from Ratcliffe Manor, Fairview and Perry Hall, were planted around the courthouse. Hemming also replaced the iron fence. 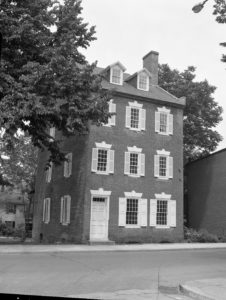 The Talbot County Garden Club is attributed in several historical articles as the impetus for the Maryland House and Garden Pilgrimage. In 1930, the Club, along with the Four Rivers Garden Club in Annapolis, began exchanging visits to gardens in their respective areas. Over time, the visits grew to what is now a yearly statewide event, with the gardens in Talbot County being among the most popular.

Proceeds from the Pilgrimage are used for projects throughout the county. For instance, in 1942 an effort was launched to recreate a colonial town around the Courthouse, and the Garden Club used proceeds from the Pilgrimage to help renovate buildings along Washington St. Money was also donated to restore Dr. Stevens’ house, which became the headquarters for the Talbot Historical Society. The award-winning gardens of the Talbot Historical Society remain a priority of the club. 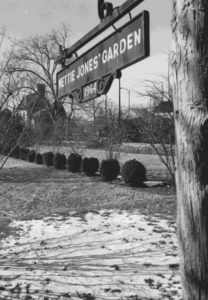 Over the next ten years, the Club planted a permanent Christmas tree for the Town of Easton, approached the state roads commission about saving trees destined to be ripped out for road construction and widening, and participated in beautification projects at the old Coca Cola plant and Easton High School.

Between 1942 and 1967, the Club experienced tremendous growth in projects. A junior club was established to encourage interest in gardening with children, plans were made to beautify the approaches to Easton on Rt. 50, the Club planted shrubs at the hospital and donated funds for trees and shrubs to be planted at the State Police barracks, and a host of other projects.

As the Club grew, its objectives were revised to: include promoting knowledge of gardening and the art of floral arranging; aiding in the protection of the natural beauty and wildlife on the community; encouraging civic planning and planting; and supporting efforts to conserve America’s natural resources.

The Club began entering award contests and used its winnings to help landscape the new Talbot County Agricultural Center and Oxford Park, as well as add gardens and plantings to the Historical Society garden.

In 1950, plans were being made to build the Bay Bridge, which promised to forever change the face of the Eastern Shore, and the next 25 years would see the Club become much more active in environmental issues, begin offering flower shows in horticulture and design, and continue to contribute to the renovation and beautification of the area as it grew.

The opening of the Bay Bridge brought tourists and wealthy people looking for waterfront escapes to Talbot County. As land was bought up and estates restored and constructed, Club members became concerned about protecting and preserving the Shore’s natural resources. With the backing of the Club, member Mrs. Robert Henry lobbied for and achieved passing of a bill to protect wetlands. 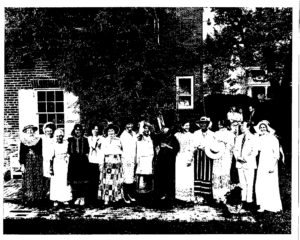 Creation of gardens continued, including one behind Easton’s hospital in memory of Dr. Winters, and an herb garden in the gardens of the Talbot Historical Society. The Club contributed to Easton’s Pocket Parks program, including the park now known as Thompson Park at the corner of Dover and Washington Streets.

A major donation was made in 1976 toward construction of The Customs House in Oxford during America’s bicentennial celebration. Later, the Club would donate trees and streetlights to Oxford, as well as take a key role in renovating the causeway.

Thanks to the Talbot Historical Society, the Talbot County Garden Club now called “Joseph’s Cottage” home, and began working on documenting the Club’s history. The Club spent several years repairing the Cottage and its grounds, which remain a part of the Historical Society’s garden. 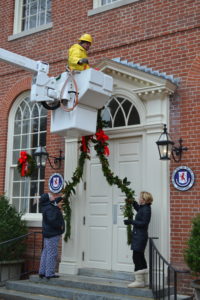 The Club also began a new annual project – decorating Easton at Christmas. In 1981 the Club decorated the courthouse, mayor and council building, library, post office and several businesses. Profits from fundraisers were donated to the Town of Easton to defray the cost of Christmas lighting. Eventually the Club would also work with the Downtown Merchants Association to purchase lights and pay for electricity to light the downtown. A huge project begun in the mid-eighties was the creation of the Fountain Garden at Five Corners. A three-tiered Italian Fountain was donated that had once graced “The Villa” on Miles River Neck before its demolition in 1950. The Fountain was then moved to the home of John Beale at the corner of South and Aurora Streets in Easton. When the property was sold, Club member Fran Stout asked the new owner of the property if she would consider donating it. With the donation fresh in hand, the Club worked with Dr. A. Gibson Packard, husband of Club member Mary Frances Packard, worked for more than a year to restore the fountain to its previous glory. The fountain was installed at Five Corners in 1989 and continues to be a showpiece for the Town as well as the Garden Club, which lovingly maintains the gardens around it.

From 1991 through 1995, the Talbot County Garden Club undertook two large projects: restoring the Easton Railway Station and creating the Mayor and Council Gardens across from the Town of Easton offices. Member Polly Shanahan was the Club’s liaison with Historic Easton on the railway project, and a plaque with her name graces the station grounds today.

Over the next 10 years, the Club was recognized by several national organizations for its work in beautifying Talbot County. Among the awards was the Maryland Governor’s Silver Beautification Award from Federated Garden Clubs of Maryland for the Club’s work on a meditation garden at Hospice House. The Club was selected by the Eastern Shore Land Conservancy as one of five winners of the Eastern Shore Achievement Award of Excellence In Community Enhancement. These are only two of the many state and national awards won by the Club during its history. 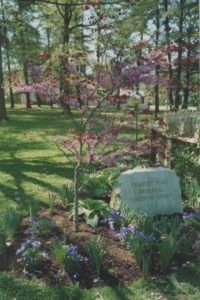 In 1999, the Club proposed developing a children’s garden in Idlewild Park and, with a generous gift from the estate of deceased member Frances Plate, a garden was created in her name. The garden celebrates the Eastern Shore with a child-sized boat for children to play on, a maze in the shape of an oyster shell featuring imprints of animals native to the shore, grass mounds for children to roll on, bird houses, a fountain, sculptures, including one of an osprey nest with adult and young birds, and winding gardens filled with colorful flowers. In 2014 the Club added a statue of a dolphin with the help of a donation from Kohl’s. As with the Club’s other gardens, a small team of members works every other week, April through October, to maintain the garden.

Other projects in the early 2000s included planting roses at Talbot Humane, planting trees and shrubs at Chesapeake Center, redesigning the garden at the bypass and Rt. 50, installing a watering system in the Mayor and Council Garden, and completing landscaping at the YMCA.

In 2005 the Club joined the Garden Club of America in addition to being a member of National Garden Clubs and Federated Garden Clubs of Maryland. The Club also became a 501(c)(3), Not For Profit Corporation.

The two major fundraisers for the Club are the biennial Maryland House & Garden Pilgrimage and the spring garden symposium in alternating years. Both events require hundreds of volunteers and thousands of hours of time. The Talbot County Pilgrimage continues to draw the most visitors of any county in Maryland, and in recent years broke its own records with more than 1,200 visitors at one of the homes. Likewise, the spring symposium continues to grow.  The symposium features nationally-known experts in gardening and design and draws guests from throughout Maryland and beyond.