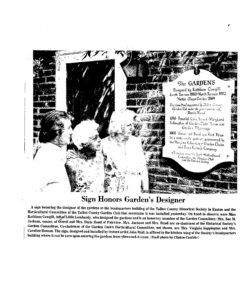 Throughout the fifty years since the idea of a public garden began as a dream in the minds of those first visionaries, the Talbot Historical Society Garden has been a place for the entire Talbot County community to enjoy.  It has been a project that proves that two organizations can work together for the common good.  Many individual and group gifts of talent, service and money have gone into making the Garden viable.  Local contributions as well as corporate grants have helped in this endeavor.  But it has been the Talbot County Garden Club, whose members provide the day-to-day direction and the hands-on labor that truly make this Garden a treasure and a memorable experience for all who visit.

The story of the Gardens begins in 1956 when the Historical Society of Talbot County purchased an old brick house, the James Neal House, on the corner of Glenwood Avenue and South Washington Street in Easton.  Built between 1804 and 1810 and greatly in need of repair, it was scheduled for demolition to make way for a parking lot.  The Talbot County Garden Club contributed toward the purchase of the property and when the restoration was complete, it was granted the privilege of establishing a headquarters in a room on the second flo 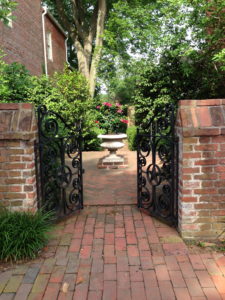 or.  The Garden Club soon funded a garden wall to enclose the street sides of the property.  The brick portions, made of century-old rose-colored brick, are a replica of the famous cemetery wall at Wye House.  The picket fence and gate were copied from the Chase-Lloyd House in Annapolis.  Post finials are enlarged forms of the acorns of the Wye Oak, the official state tree.

So went the funding, planning, and planting over the years.  Great attention was paid to detail whether it was a terrace garden, brick steps, or a troublesome area of erosion.  The early garden was designed with plantings that would have been found in an 18th Century garden.  Later projects created a Federal period garden and, still later, a 19th Century garden.

The garden includes materials from several noteworthy sources: the ornate wrought iron gate came from New Orleans; the gate’s brick columns from the old Charity School, later the County Almshouse; and, bricks and stone sills for the terrace and walkways were reclaimed from early Easton sidewalks and the original Idlewild School.

To quote from a Garden Club report from 1969: “Today the Gardens represent ten years of planning and work.  Progress has not always been easy.  The first five years of spectacular growth were followed by three discouraging years when there were no funds for development and even daily maintenance became a problem.” 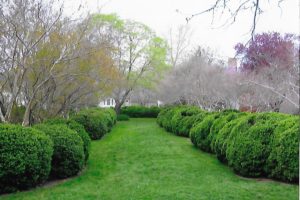 The Garden Club’s Horticulture Committee took up this challenge.  Their fifteen members invested and reinvested their small funds in popular resale items, rooted boxwood for sale, and with the help of the Historical Society, put on several successful plant and garden accessory markets.  They reduced the cost of maintenance by scheduling regular spring and fall workdays and the gardens, taking their own tools and stopping only for lunch in the old kitchen.

The town of Easton and the Historical Society co-operated fully and soon there were numerous memorial gifts for special projects.  1968 brought the House and Garden Pilgrimage “Special Civic Award” and in 1969, 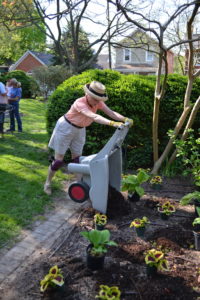 the Garden was awarded the Governor’s Bowl and First Prize in a state-wide contest for “the most outstanding Civic Development Project,” sponsored by the Maryland Federation of Garden Clubs and Sears, Roebuck & Company.

When the Historical Society wanted access to the Garden from Washington Street, the Garden Club used funds from the House and Garden Pilgrimage. A grandson of the mason who had built the original wall was hired to cut a hole in the wall. An ironsmith was hired to make a gate, and new plantings, including donated Korean boxwood, were installed. Noted landscape designer, Gordon Hayward, added pebbled pathways and suggested plant material. Benches and chairs were added in the terrace. In 2000, miniature boxwood from the Mount Vernon gardens were purchased by the Garden Club and planted in the Huxley Herb Garden.

In the past decade, many more projects were completed in the Garden including the installation of a donated wrought iron fence and gate. An irrigation system was donated to water the perennial gardens and surrounding areas. The Historical Society Garden was certified as Bay Wise, ensuring that fertilizers and amendments would not harm the Bay; and most recently investment has 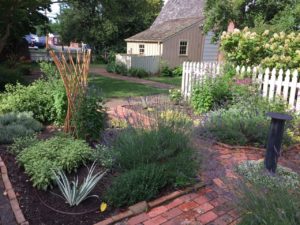 been made in the Huxley Herb Garden. All of these improvements enhanced the beauty of the Garden and ensured its endurance as a horticultural gem within the Town of Easton.